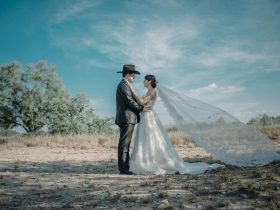 All the Things You Need To Know About Wedding Veils

A Kerala wedding is an epitome of simplicity, authenticity, and grace. A Kerala wedding bride also symbolizes the same! The modern Kerala society is defined by its antiquity and the organic continuity sustained by Keralites.

Every religion, sect, caste has its own distinct wedding traditions and customs but fundamentally they are similar.

Before discussing the variety of attires, a Kerala bride can wear, it is imperative that every bride-to-be sets her fitness goals, consult a trainer in the gym, stock appropriate gym apparels and start the target work out with a full vengeance to achieve the desired fitness and figure to fit into her dream wedding dress!

Also, pre-wedding preparations include planning the theme of the wedding.

The bride and groom to be must consult good wedding planners to organize their dream wedding and design accordingly wedding banners for the D-Day!

The six ways in which a Kerala wedding bride can be dressed primarily depends on her religion, caste, sect and of course her tastes and preferences.

There is a sect of Tamil Brahmins in Kerala who had migrated from Tamil Nadu to Kerala centuries ago and settled in Palakkad district of Kerala.

As per age-old traditions, this Tamil Brahmin bride from Palakkad district of Kerala is dolled up in rich Kanjeevaram sarees or Madisar.

Her hair is tied into a long braid which is heavily decorated with flowers. She also wears a waist ornament called oddiyanam and forehead ornament ‘netti chutti’. She is decked up with gold ornaments such as necklace, nose ring, gold chain and dozens of gold bangles.

The look reaches its crescendo when the groom ties the gold mangalsutra popularly known as ‘Taali’ around her neck.

Kerala Muslim brides dress up in any colour (mostly green or pink or light pastel shades) Lehengas, Anarkalis, Shararas and mandatorily dorn a dupatta or wear a hijab to cover their heads.

Accessories also include Arappatta which is basically a waist belt made out of gold).

Traditionally Namboothiri brides pose a simple look by donning a four-length Mundu (Muzhuvan Udukal and another Mundu is pleated and worn covering the upper part and head including the face sometimes.

For the sari look, gold jewelry such as bangles, a necklace would add to her grace. The Bridal look is complete with white veil and arch type crown.

The sari is complemented by gold ornaments such as necklace, gold chain with pendants, earrings, maang tikka, bangles etc.

Malayali Nair weddings in Kerala are a simple and brief affair. They have very limited rituals and much lesser religious mandates.

A traditional Nair wedding can take place in a nearby temple. Akin to her culture the Kerala Nair bride wears silk sari and fine gold jewelry like Netti chutti (maang tikka), gold jhumkas, gold necklace, and her braided hair is decorated with white jasmine flowers.

Considering the above, a wedding is a woman’s ultimate fantasy and in case of Kerala Brides, their simplicity in rituals and traditions and in some cases their attire and style is their essence of surreal beauty and grace.

Sara O Brown is a working mom, lives with her dentist husband and her adorable dog, Casper. She is passionate about traveling and cooking. She has been writing for houseofpain.com 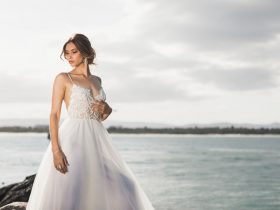 Accessorizing the Wedding Dress: 6 Tips to Choose the Jewelry 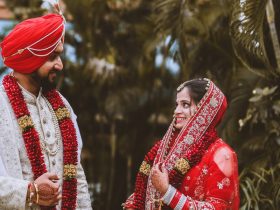 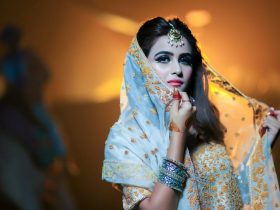 What to Wear to an Indian Wedding Event as a Guest?

All the Things You Need To Know About Wedding Veils