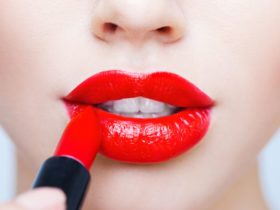 Makeup for such symmetrical faces is focused on reducing the roundness and making the face appear angular and slimmer.

Here are some ways in which round faces can be made to appear sharper:

Shading or contouring the temple, the cheekbones, and the jaws can give an illusion of length to the face. This can be achieved by using a contouring product that is a few shades darker than one’s skin tone or a foundation that is darker than what one regularly uses. The product should be lightly used along the jawline, the cheekbones, and the nose. This tends to make the face look more oval. Too much product can make one look burnt, so care should be taken when applying it.

The eyebrows can be lengthened using an eyebrow pencil to give the eyes an angular shape. Thin and pinched eyebrows that draw more attention to the round shape of the face should be avoided. The natural thickness of the eyebrows should be maintained. However, one should refrain from making the eyebrows too angular because it gives one an unnatural look of surprise.

In order to attract attention to the corners of the eyes, two different shades of eye shadow can be used-a lighter shade near the lash line and a darker shade above the crease of the eye. This makes the eye line look longer in an outward direction. Shades of brown and deep blue are best used to achieve this effect.

Eyeliner can also be used to define and highlight the eyes and make them appear narrower. The eyeliner should be smudged a little close to the lash line. This will help achieve the intended effect more than a thin, straight line. Darker shades such as black and blue are more effective than others.

6. Contouring With A Bronzer

A bronzing product can be applied under the cheekbones to make them look higher. It can also be applied parallel to the jaw line. Using it under the chin also gives the same heightening effect. However, one should be careful to blend the product carefully so that there are no visible lines.

Shades of plum and berry can make the lips pop, thus reducing the focus on the roundness of the face. For women with lighter complexions, shades of peach and pink are ideal. Products like lip-gloss or shiny and creamy lipsticks work better than matte ones.

A small amount of highlighting product can be added to the top and the bottom of the lips to accentuate their shape.

Applying bronzer or a highlighting product on the sides of the nose in downward strokes starting from the bridge makes the face look thinner. A little spot of product on top of the nose can also reduce the flat and round look of the face.

Makeup tricks can be used to hide the flaws of every type of face. Round faces tend to look flat and “fat.” However, round faces are also the most youthful of all faces. Precise and clever use of makeup can accentuate the better features of one’s face such as the eyes, lips, and nose. The idea is to draw attention away from the flatness of the face and create an impression of height and angles. Just the right amount of product and the appropriate strokes of an angled brush can work wonders!

Nelson Homes is a blogger for hallandwrye.com He likes to blog about various cosmetic surgery procedures and skin care treatments. To know more you can follow him on Twitter, Google +

5 Things You Need to Know Before Getting Eyelash Extensions

How to Pick the Best Wax for Hair Removal